At last the grass is growing!

Spring has been slow to get underway this year, but now it has the garden is beginning to look rather ragged around the edges.

Here is how we use the scythe to give the garden a bit of a Spring tidy up.

The short video at the end shows some of the mowing techniques we use.

My scythe spring tidy up started in a neighbor’s garden.

Using a 60cm Falci 128 I gave the small grass area above the vegetable beds it’s first trim of the season.

I was mowing on a sunny afternoon so the grass was dry, making it slightly more challenging to mow. It would have been even more fun earlier in the day with the dew on the grass, or even on a drizzly day. 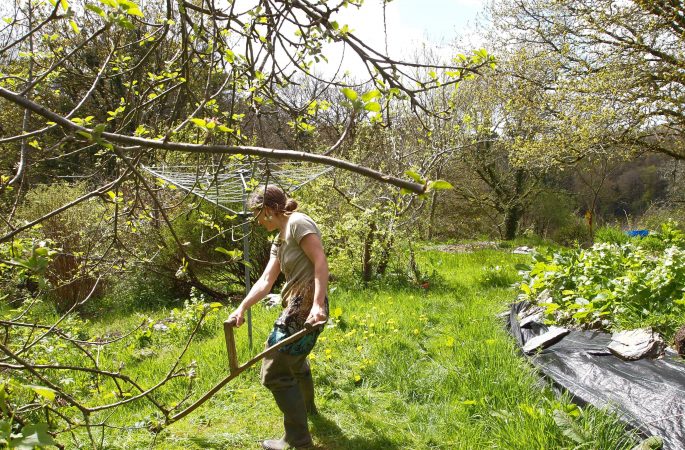 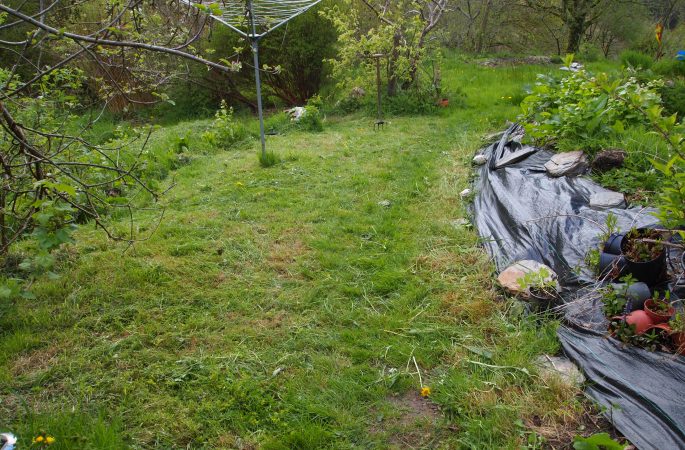 The 128 is a lovely, fine, light blade which cuts grass and soft weeds beautifully. It’s curved shape was useful whilst trimming along the base of the bank.

The resulting mowings were put straight to use as mulch on one of the garden beds.

I will use a heavier blade (eg a Styria or a Falci 187) to trim the top of the bank and other parts of the garden where there are tougher weeds and a lot more hidden stones.

Phil has been working on our garden. His early start coincided with the last frosty morning of April. Lightly frosted grass is as easy to mow as dewy grass!

Using his favorite Luxor blade he started by giving the lawn a trim.

Phil cut some of the lawn so that the mowings formed an “instant mulch” that did not need to be moved.

By mowing towards the edges of the perennial beds surrounding the lawn, the grass can be left where it is dropped by the scythe.

Mowing clockwise around a bush or a tree has a similar result – the scythe stroke will leave the clippings in a mulch “doughnut” around the plant. No tidying up needed! 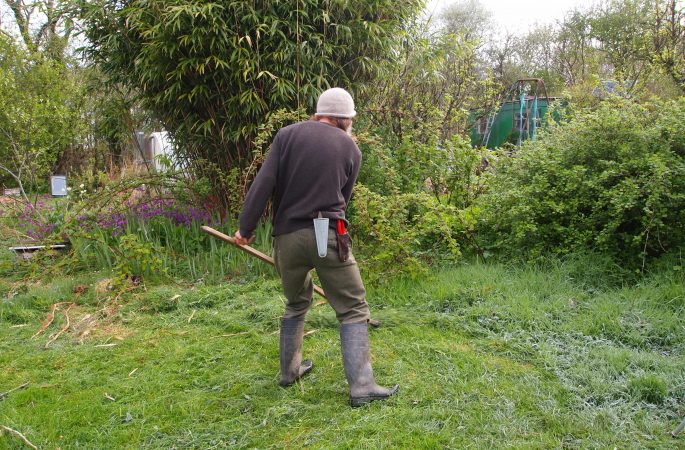 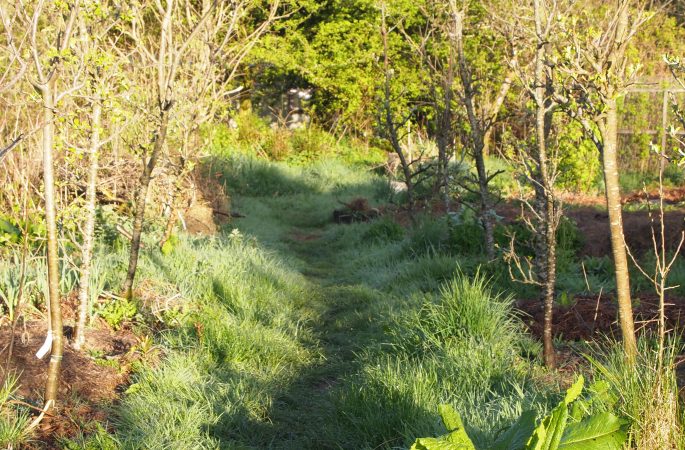 A narrow path between sets of garden beds

We generally advise people to use the longest blade possible when mowing a given area, as the mowing will progress faster.

The longer blades can “bite forward” deeper into the vegetation with each stroke. It is this that increases speed, rather then increased width of the area mown in one pass.

We have set up the main paths in the garden so that they can be mowed with a reasonable length of blade. Phil used the same 75cm blade he was using on the lawn to mow the path under the apple tree arch (approx 5 feet wide).

We do have a couple of narrow paths between sets of garden beds (approx 2 – 3 feet wide). Phil used a 40cm Luxor to trim along these paths. A 50cm length blade would also have worked.

The paths between the individual garden beds are very narrow, just wide enough to walk along comfortably or crouch down and work.

The narrow paths maximize growing space but are rather numerous!

Whilst they could be trimmed with a short scythe blade it would be slow and time consuming. Instead these paths are kept mulched with old hay, grass, cardboard or bracken to suppress weeds and minimize maintenance.

Scything in the garden – techniques

There are numerous techniques that can be used when scything in the garden.

Mowing along edges, around obstacles, leaving choice plants…. It is easy to give a demonstration but harder to write it out in words!

The video to the right was filmed over two mornings while Phil tidied up our garden and shows several of these techniques.

Size 4 (extra-long) snaths and Profisense meadow blades are out of stock. New stock expected end 2021. Due to manufacturer issues galvanised stone holders are out of stock until further notice. Dismiss