Twice a day I go to the barn to fetch hay for the livestock. Just recently I have reached a particularly fragrant layer in one of the stacks. As I pull out the hay I am surrounded by the rich, sweet smell of summer.

Looking at the hay that is coming out, which is very rich in herbs, I think this must be hay that we made early in the season (early June) on the top field. The weather was great, the grass and herbs were ripe and the hay made well. The quality is encapsulated in the hay that the sheep and goats are currently enjoying. 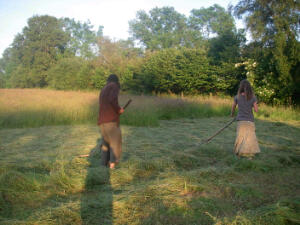 Phil and I rowing up the hay together in the late evening, June 2014

The scent of the hay may be in part due to the presence of Sweet Vernal Grass (Anthoxanthum odoratum) which contains the chemical coumarin, considered to be the classic scent of new mown hay. A synthetic version is widely used in the perfume industry.

Lady’s Bedstraw (Galium verum) is another plant with a high coumarin content. Historically it was placed in mattresses and strewn on floors because of it’s pleasant scent when dried.

The Top Field certainly looks different from it’s summer glory at the moment. While the whole field has been grazed short by sheep, the area that we mowed in the summer is still visibly different to the areas that were left to grow then grazed off late in the summer. Plenty of mole hills too!

Top field, Jan 2015. The area that was cut for hay is to the right of the photo.