The last of Cae Mari Jones has been cut. Some of the patches that had a lot of Knapweed in have been used to mulch various areas of perennial plants. We have also made a couple more racks, managing to wilt the hay sufficiently between the showers. 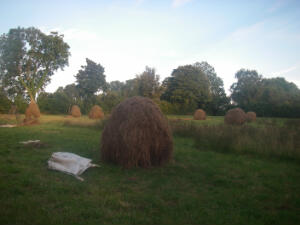 The number of racks on the field is shrinking as we bring in more then we make. Soon it will be time to store the racks away in the loft and hay making will be finished for another year.

We welcomed two new residents to the Trust last week – Amber, a Golden Guernsey x British Sannen and her kid Red Campion. She is doing a lovely job of munching back any brambles that have crept out too far into the fields as well as providing delicious milk. She has also been enjoying the hand made hay when in her shed at night.