Another spring time job is setting up the electric fencing on the spring / early summer grazing. Over the years I have worked with it a lot and come to appreciate its flexibility and usefulness and learnt some useful tricks to counteract some of its disadvantages.

So why do we use it? Subdividing fields into small parcels means we can move grazers frequently. The sheep and goats will be on the 2 acre bottom paddocks from now until the first aftermath grazing is available on the hay fields. Using electric fencing, the paddocks are divided into six roughly equal areas.

The animals are moved to a fresh area each week. The first patch will have been rested for about 5 weeks before the grazers get back to it again. This is beneficial for intestinal parasite control and it lessens the effect of the sheep / goats overgrazing their favorite plants while ignoring the less palatable, which can occur when set stocking on an area. We have also found that there is more opportunity for flowering on the resting areas, potentially benefiting pollinators.

Why use electric fences rather than erect permanent fencing? It allows us to manage grazing where it would be inappropriate, time-consuming or expensive to erect permanent fencing. Electric fencing is also highly flexible. We have tried out several arrangements on the paddocks before settling on the pattern we use now. Should stocking change in the future there is scope to change again. And come autumn time, when we use the paddocks to graze the cow, we can take out the sheep fences and use the electric fencing to strip graze instead.

Ok, the bad bits – it’s not cheap to buy initially, it can be time-consuming to set up, can get into dreadful tangles if you don’t treat it with respect and can be extremely frustrating when the sheep insist that the grass IS greener on the other side and they ARE going through to it! 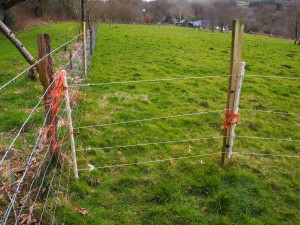 With planning, and sufficient posts and wire, we now set up a series of semi-permanent fences, much reducing the time spent taking down and re-erecting fences. An appropriately powered fencing unit and carefully erected fencing generally keeps the sheep and goats in place from spring to early autumn. In winter when grazing is sparse the sheep test the fence much more. We have found that making the fenced areas bigger at this point seems to help, then we revert to extensive grazing on the hay fields in the depths of winter.

A cunning way of storing lengths of wire on sticks, learnt when WWOOFing as a teenager, and electric fence “gates” between paddocks keeps tangles to a minimum and makes frequent moving of livestock much easier. And of course, should the grass get away from the livestock, a scythe is just the thing for trimming the grass under the fence and preventing it shorting out.