Conventional advise has suggested waiting until July or later before beginning to cut wildflower meadows.

However, in recent years this has begun to change and we have started some of our hay making from the end of May.

One late cutting date is more suited to machine mowing, where as hand hay making lends it’s self to a more nuanced approach.

This may have interesting benefits for both the meadow and the mower.

There are many reasons we start hay making early.

It allows us to spread hay making out over a longer season. We can then get enough hay in by cutting little but often over the whole summer.

It allows us to take advantage of the good weather that often comes early in the season.

We can also make some hay that is of high nutritional quality – early cut hay gives a lower yield but is nutritionally rich; later cut hay tends to have more bulk but be more fibrous as plants are running to seed. As Simon Fairlie is fond of saying, “Hay that cuts like butter makes the best butter”

One other interesting and potentially beneficial effect of cutting part of a meadow early is that it prolongs the flowering season of the meadow as a whole. The effect is particularly pronounced when cutting at this time of year, a technique known to gardeners as the Chelsea Chop.

The Chelsea Chop (so called because it is usually carried out at the end of May, coinciding with the RHS Chelsea Flower Show) is a pruning method by which you limit the size and control the flowering season of many herbaceous plants.
Royal Horticultural Society (RHS)

The idea is that by cutting back plants before or just as they come into flower there will be a subsequent delay in flowering as they regrow. If some plants are cut and others are not the flowering season will be extended.

Using the Chelsea Chop in the meadow

As you can see from the pictures to the right, plants such as Cat’s Ear (Hypochaeris radicata) and Rough Hawksbit (Leontodon hispidus) are about to flower in the area we are cutting.

We find that plants such as these will have regrown and be strongly blooming after the rest of meadow has bloomed and gone to seed.

By starting at one end of this four acre meadow and progressively cutting across it over several months we can prolong it’s flowering season to encompass the whole summer (May- Sept). 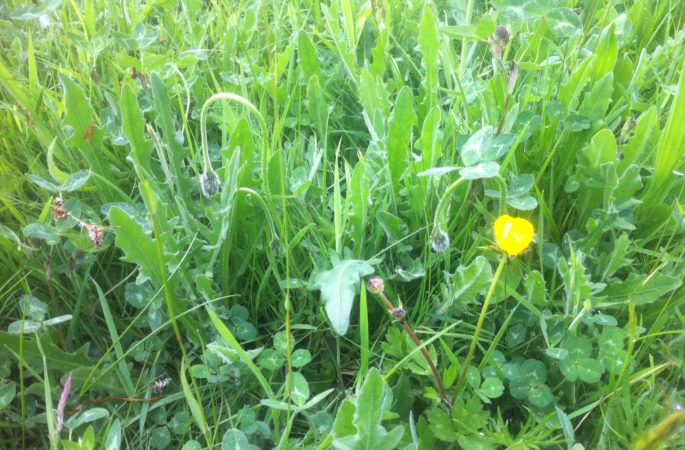 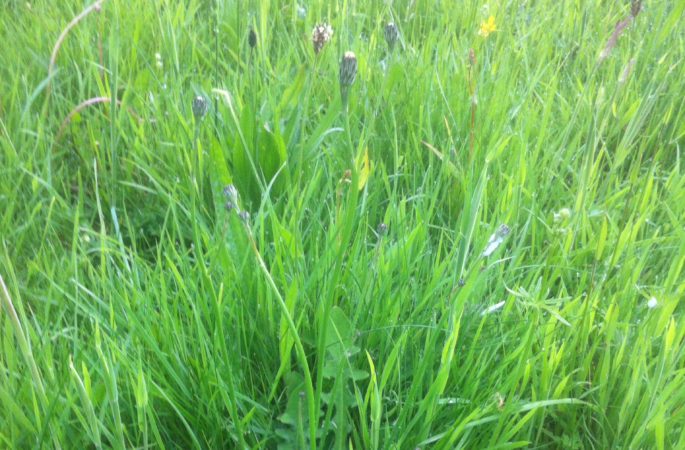 The time at which an area of meadow is mown will promote or suppress different species. Some, such as Red Clover (Trifolium pratense), seem to respond positively to an early cut.

Some plants don’t respond so well to early mowing. Yellow rattle (Rhinanthus minor) is an annual and flowering will be prevented by an early cut. As we have very large areas of Yellow Rattle in other places on the farm we do not mind if some areas are less rich. Our aim is not to have a uniform spread of species across all 6 acres of the meadows, but as much variety as possible. Early mowing could even be used as a method to restrict Yellow Rattle in areas where it has become too dominant.

The majority of meadow plants are perennials, so if they miss out on flowering one year they will survive to the next and get the opportunity to flower again.

Orchids do not re-flower if cut back early in the season. We therefore restrict our early mowing to areas that are less rich in orchids.

If the occasional one gets mown, as a perennial it is likely to have the chance to flower again in another season. Also, the beauty of the scythe is that you can see what you are mowing – you quickly learn to spot orchid leaves as well as the eye-catching flowers. The mower can then choose to scythe around the orchid and leave it to flower and seed.

The mowing looks a little more tufty and untidy (and the hay makers may curse under their breath slightly as the rake catches….) but that is a small price to pay. 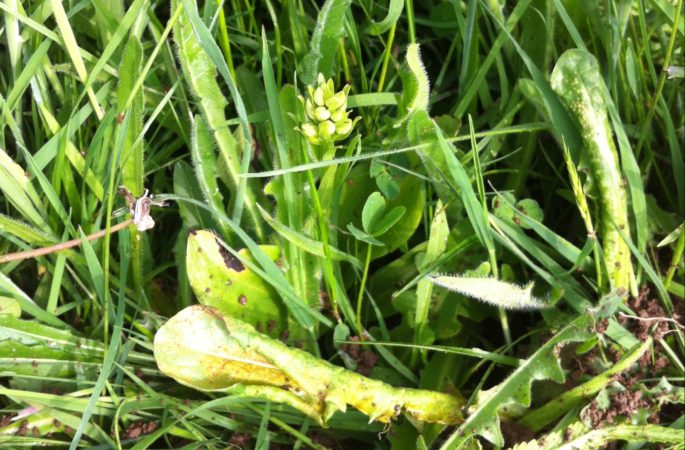 Greater Butterfly Orchid about to flower, carefully mown around by an observant scyther

Selective Mowing with the Scythe

We actively use the scythe to promote some late flowering species in the meadows that might otherwise be suppressed even by a later cut.

Knapweed (Centaurea nigra) is a tall, tough, sprawling perennial meadow plant. It is loved by pollinators when in flower and by birds such as Gold Finches when it has run to seed. It’s tough, fibrous stalks do not make great hay and very late cut meadows can become dominated by it.

When we start mowing our second hay meadow, Cae Mari Jones, from July onwards, we actively mow around areas of it, leaving it to flower and set seed. In this way we can benefit from it’s beautiful flowers and seeds without having to delay cutting the entire meadow, with the consequent loss of quality of hay that this would bring.

The Benefits of Progressive Mowing 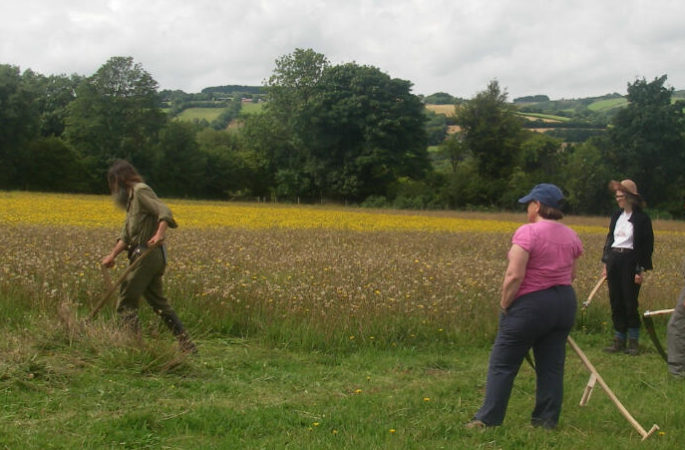 Phil cutting into seeding grass and wildflowers. The haze of yellow in the back ground is an area that was cut in early June and is now re-flowering

A prolonged flowering season will be beneficial to pollinators such as bees, providing them with a continuous nectar and pollen source.

Invertebrates and small mammals will benefit from the provision of a variety of heights of vegetation. While some areas will have been mown short others will be regrowing or yet to be cut, providing long vegetation for cover.

Selectively leaving some plants to flower and seed can provide food sources late into the season and on into the winter.

Of course, supporting invertebrate and small mammal populations is also beneficial to the bigger and more impressive members of the meadow ecosystem, such as Barn Owls.

This is in stark contrast to modern farming practice, where 100’s of acres of grass will be cut short and carted off for silage in just a few days of good weather.

While there are unarguable benefits to wildlife from cutting meadows late, our experience is that a more flexible approach has it’s benefits too.

Starting earlier and cutting small areas at a time over a long season makes mowing by hand easier and may result in greater biodiversity overall.

It probably also more accurately reflects the historical patterns of mowing that gave rise to these meadows originally, where hay making would progress across the whole season.

The scythe also gives you the opportunity to pick and choose on a very fine scale, leaving individual plants where this may be a benefit.